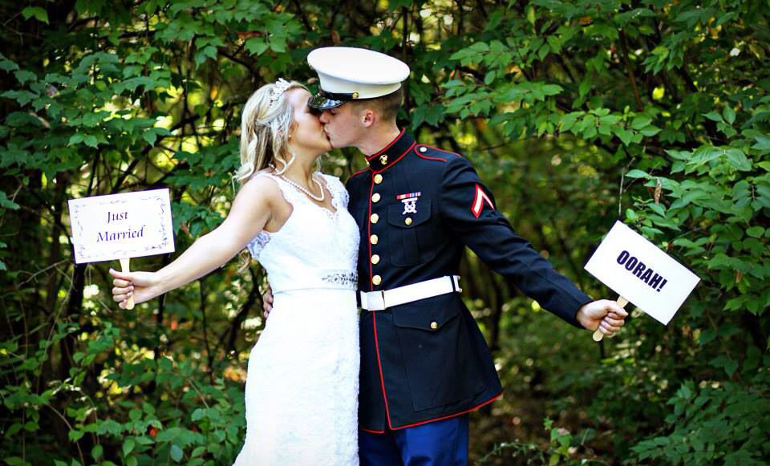 Military weddings are uniquely beautiful in their expression of patriotic pride.  Military personnel and their spouses are often asked to make great sacrifices for their service and its fitting their special day includes tributes to their service, commitment and military traditions.

Each branch of the service has its own unique variations of some of these traditions and protocols, but we’ve gathered the top rules and etiquette you’ll want to reference to plan your big day.  Or even to know what to expect at a wedding you’re attending!

Consider Military Chapels or Academies for wedding locations.  You can be married by a military chaplain, as well.  While the chaplain’s services are free, they may require a session or two of pre-marital counseling and it’s customary to donate $50-60 to the chapel as a sign of appreciation.  Chaplains can be a great resource for help with protocols, chapel rules and what you need to coordinate details for the location.  It’s best to book early!  Plan on 3-6 months for most chapels, but if they’re popular, you may need to reserve a year or more in advance.  Learn about service Academy Chapel weddings for your service branch: Westpoint Chapel,  Naval Academy Chapel or  Air Force Academy Cadet Chapel (under renovation until 2023) or the Coast Guard Memorial Chapel.

With your date and location set, you naturally start to think about sharing the good news with save the dates and invitations.  For military weddings, there is protocol for these as well.  Don’t worry… it’s not too complicated.  It’s all about recognizing rank and titles.  If either parent, bride or groom are an active duty member of the military or a retired veteran address them by their rank using the following guidelines.

If addressing a senior grade officer their title goes before their name and branch of service follows on a second line.  Retired status is noted last, if applicable.  For example:

When addressing a junior or company grade officer their title and branch of service follow their name on a second line.  For example:

If addressing enlisted personnel, titles are typically omitted, and branch of service follows on a second line.  For example:

When addressing military guests, the same rules apply by rank.  “Mr.” or “Mrs.” should not be used to refer to any personnel on active duty.

Seating arrangements are always fun at a wedding, but for a military wedding, rank is a factor that takes priority.  All high-ranking officials must be seated in positions of honor at both the ceremony and reception.  Additionally, a special place should be reserved for the commanding officer of the bride and/or groom.  If the couple’s parents are not present, it’s customary to seat commanding officers and spouses in the front row of the chapel or church.  Military guests should also be seated according to rank.  This recognizes military tradition and seniority.

Similarly, guests will be seated by rank at the reception as well.  Your installation protocol officer can help you with your seating chart.

If the groom is in the military, he must wear the appropriate dress uniform for his service.  Depending on rank and branch of service, he may wear a saber or cutlass and white gloves.  No boutonniere or other decorations may be added to his uniform.  Military standards for grooming apply, including hair length and a clean-shaven face.  While a bride usually stands to the left of the groom, in a military wedding, she stands to his right – away from his saber.

If the bride is in the military, she may choose to wear her dress uniform or a traditional wedding dress for her big day, and she may carry a bridal bouquet with either.

Groomsmen in uniform may not wear boutonnieres or any other added elements or decorations on their uniforms.  All groomsmen in dress uniforms should wear white gloves except the groom and best man, who will be handling rings as part of the ceremony.

Often Marine Corps Weddings and other service brand weddings will include a prominent display of the American Flag.  As a sign of respect, the flag is often placed to the left of the officiant during the ceremony.

Walk the Arch of Sabers / Swords

A favorite of military wedding parties and guests, the traditional Arch of Sabers Ceremony is a moment set aside to welcome a non-military bride to the military family.

The placement of the arch depends on the branch of the military the spouse(s) serve in. The Army and Air Force can choose to include it before or after the ceremony.  The Navy and Marine Corps usually include it at the close of the ceremony when exiting the chapel.

An outdoor arch is formed by two rows of facing service members in uniform.  The arch is formed after the wedding party exits and before the bride and groom exit.  After announcing the couple, the bride and groom walk under the arch until they near the end.  The last two swords are lowered, stopping the couple, where the service members will yell for the bride to “Give the man a kiss.” The swords are lifted again once she does so.  If the bride is not part of the military, one of the men will tap the woman on the behind with their sword and they will yell “Welcome to the (Branch of Service), Mrs. (Surname).”

From here on out, they both will serve and make sacrifices.  This welcome gesture signifies the bride has entered the camaraderie of the military family.

For commissioned officers, some branches add a fun twist to the cake cutting tradition.  Saber or cutlass bearers enter the reception in formation in front of the wedding cake, facing each other. A sword arch is formed again and the couple pass through it to reach the cake.  The groom now hands his sword to his new bride and places his hands over hers.  Together, they cut the first piece cake.

Make a statement at the receiving line by following protocol and displaying colors.  Protocol demands the uniformed groom to precede his bride in the line, symbolically protecting her.  Display national colors and/or flags directly behind the center of the receiving line.

Insure the Day Military wedding or civilian, it’s best to cover your wedding and all it’s expenses with Wedding Insurance.  In the military, flexibility and resilience are needed for the unpredictable.  Make sure you have coverage, understand it’s limits and include coverage for military duty or deployment.  You can learn more in our related article, “Your Wedding Life Preserver.”