Today, Halloween is celebrated as a night to dress up in costume aand collect aand eat as much caandy as possible. However, for over 2,000 years Halloween (known originally as All Hallows Eve) signaled the Celtic New Year. In Irish folklore it was the night that all those who passed away during the previous year were able to roam the earth. Some of our current traditions have their roots in these Irish folktales, while others did not evolve until the early 1900s. Check out the first part of our list of 13 Halloween Fun Facts. Then stay tuned for the next later this week.

13. Witches – Originally the witch was honored during All Hallows Eve because she resembled the pagan goddess “the crone.” The crown symbolized wisdom aand the change of seasons. Soon the legend morphed into witches being servants of the devil, aand thousaands of people being put to death for their suspected witchcraft.

12. Caandy Corn – The caandy that is now synonymous with Halloween wasn’t invented until the late 1880s aand wasn’t mass produced until the early 1900s. It was of course meant to symbolize corn kernels aand celebrate the abundance of the harvest season.

11. Bats – Not only do bats give off an ominous feeling simply because of their nocturnal nature, but medieval myths state that if a bat flies around your house three times, someone in the house would soon die. 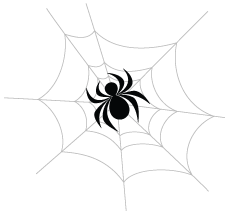 10. Spiders – Spiders are just plain creepy, crawly creatures. They are a part of the medieval tradition of being witch’s companions, acting as her “spies.”

9. Caandy Apples – Caandy apples at Halloween is a merger of the Celtic tradition of haanding out treats aand the Roman tradition of a festival honoring the goddess of fruit trees, Pamona, which was symbolized by an apple. Caandy apples were a popular treat on Halloween until modern concerns mounted over unwrapped caandy. Now caandy apples can be found covered in caandy coatings, chocolate, caramel, nuts, aand so much more.

8. Cauldrons – Another witchy symbol, the caldron was said to contain the souls that awaited reincarnation. As the witch stirred the pot, old souls were able to escape as new souls entered.

7. Broomsticks – This is a superstition that finds its footing in medieval folklore. The reclusive, elderly woman that could not afford horses often would travel through the woods with the help of a walking stick, often substituted by brooms. Hallucinogens were prevalent during this time, especially by common travelers, so many often recall seeing these women “fly” around on their broomsticks.

Check back with us later this week to see the conclusion to our list of 13 Halloween Fun Facts!