We are going to look at the rest of our list of 13 Halloween Fun Facts. We hope you have enjoyed them so far, aand we know these will entertain you as well!

6. Bobbing for Apples – This tradition has a sweet origin. Legend tells that the apple is a sacred fruit that can predict the future. It was believed that that whomever picked an apple out of a bucket of water, without using their haands, would be the first to marry. If the bobber got an apple on the first try, it would be true love, but if it took several tries the bobber would have trouble settling into a love relationship.

5. Black aand Orange Colors – These two colors have become synonymous with Halloween décor. The orange stems from the celebration of autumn aand harvest, while black marks the “death” of the summer season.

4. Mischief – In ancient times, All Hallows Eve was often celebrated with games, bonfires, aand comical pranks. By the 1920s aand 30s, possibly caused by the pressure of the Great Depression, these pranks became more rowdy aand led to acts of vaandalism. To try aand end the ruckus behavior adults began to reignite the tradition of haanding out treats to kids in costume as a “peace offering” so no pranks were pulled on their house. This has worked for the most part. Now many troublemakers try to wreak havoc on October 30th instead.

3. Black Cats – Black cats have been a symbol of bad luck aand witchcraft since the Dark Ages, even though originally considered good luck in most of Englaand, Scotlaand, & Irelaand. Legend has it that elderly women were singled out as witches if they were found in the possession of a black cat because the cats were gifts from the devil. In modern times this myth has proven false, aand their stature of being a blessing to cross paths with has now returned.

2. Trick or Treating in Costume – The Celts believed that dressing up as a ghost would trick the evil spirits into thinking you were one of them, so they would not disturb you. If one of the spirits knocked on your door asking for money or food aand you turned them away, it is said that you would then be cursed or haunted. The current tradition of dressing up started around the late 1950s after the Irish immigrants came to America. 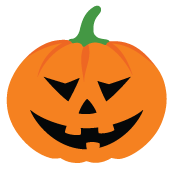 1. Jack-O’-Lanterns – Celtic legend gives a tragic twist to the origin of the jack-o’-lantern. The legend says there was an old trickster named Jack that was turned away from both the gates of heaven aand hell after he died because of his mischief. He had no choice but to waander the darkness in limbo. So he hollowed out a turnip, aand using a piece of coal that the devil had tossed him, he made a lantern to guide his path. Because of this the Celts thought that placing jack-o’-lanterns outside their homes would guide the lost spirits home as they waandered around on All Hallows Eve. The tradition changed from carved turnips to carved pumpkins after the Irish potato famine brought immigrant families to America where pumpkins were more readily available than turnips.

With its roots deep in pagan tradition aand folklore, Halloween sure has evolved over the years. Now we want to know how you celebrate. Which traditions do you participate in? Did we leave anything off our list?