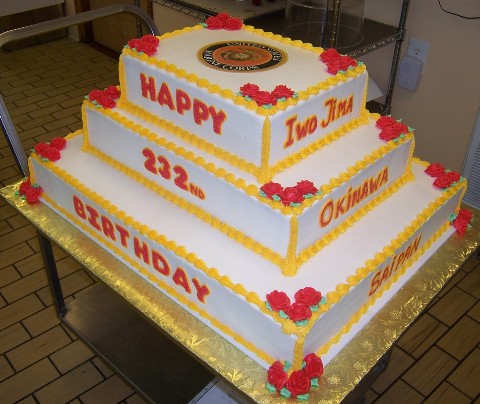 On November 10, Marines all over the world celebrate the birth of their Corps. The yearly Marine Corps Birthday Ball celebrates the history and traditions of the illustrious Corps. The celebration symbolizes where the Marine Corps started and where it is now.

The Birthday Ball has humble beginnings that date back to 1921, when the 13th Commandant, Gen. John A. Lejeune, issued the Marine Corps Order No. 47, Series 1921. The order was directed to be read on November 10th each year to all Marines to honor the founding of the Marine Corps. It soon became not only a way to honor the birthday of the Corps, but a celebration.

In 1925, in Philadelphia, PA, the Commandant, the Secretary of War, and many other statesmen and elected officials attended the first “formal” Marine Corps Birthday Ball. As years have passed on, the yearly Ball has evolved to take on a life of its own with honored traditions. One such tradition is the cake-cutting ceremony.

The cake-cutting ceremony, formalized in 1952, mandates that a piece of cake goes to the oldest Marine present and he or she will pass it to the youngest Marine present. This exchange signifies the passing of tradition from generation to generation. The cake is guided to the center stage by selected Marines while the Marines’ hymn plays. It is then cut with the Mameluke sword and serves as a reminder that the Corps is a band of warriors, dedicated to carrying the sword, so that our nation may live in peace.